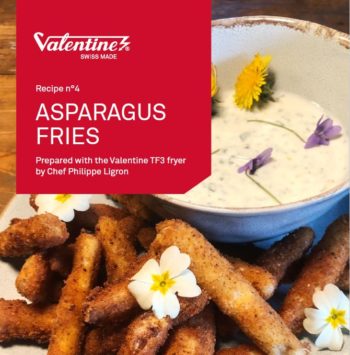 Indeed, during our culinary appointments with Valentine, I often tell you stories about history and culinary traditions but what if today, we were going off the beaten tracks to ask ourselves strange questions such as knowing who this asparagus is and what history it has ?
It is clear that once again we will be surprised by these paths of life… A bit like everyone!

Traces of the asparagus can already be found 3,000 BC on Egyptian frescoes. It was appreciated for its taste and its diuretic properties. Romans and Greeks were very fond of it. Of course, the asparagus was also noted for its so-called aphrodisiac virtues, certainly argued by its unequivocal shape!
Strangely, the asparagus does not seem to be mentioned in the “Capitulaire de Villis”… Not prude enough?

The asparagus probably patiently waited for the ardour of the Renaissance to arrive in Europe and not even through the quickest way; first cultivated in the Flanders region before timidly appear in our fields.
Its culture will improve over the centuries and reach its peak during the Century of the Libertines at the court of Louis XIV, great Epicurean, and especially with his grandson Louis XV… Madame de Pompadour makes great use of it for its alleged virtues in order to overcome the failures revealed by the insistent insistence of her royal lover Louis XV.
Called at that time: “Royal vegetable”, “Spring in stem”, “Ivory to eat” or “Point of love”, the asparagus found its letters of nobility with the aristocracy.

To meet with the gastronomic expectations, the asparagus discreetly enters Switzerland by spreading in the eastern part, on the plateau and in the Chablais region to our greatest delight. As a result of ongoing drastic selection work by our producers, the asparagus awaits you from various culinary sources and also invites you to discover its different varieties.

Today, I offer a funnier and “Apero-style” version!
Enjoy the tasting!