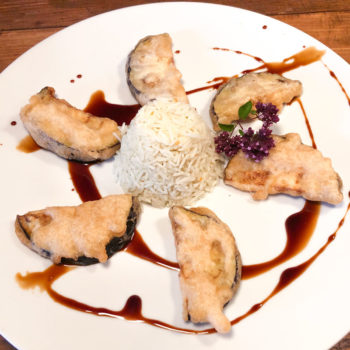 Did you know that tempura has a rather original life course?

In our gastronomic history, most of our food and know-how either comes from the West through the conquistadors during the Renaissance period, or from the East through the Spice Routes (also known as Maritime Silk Roads)!

Well, tempura seems to have done a trip against all logic. It seems that tempura is a Japanese interpretation of the Portuguese “Peixinhos da horta” imported into the land of the Rising Sun.

So what is the relationship with Portugal then? It looks like the Portuguese Jesuit missionaries would have imported this preparation in the 17th Century.

The Japanese, which are epicureans, then adapted the tempura to their taste by lightening the batter and eating them in the form of skewers, while standing.

Restaurants specialized in tempura only appeared long time later, but to our great delight!

Why do I like this recipe? First of all, because it’s tasty, but also because it allows us to use all those bits of vegetables that we have left in our refrigerators! Preparing them in tempura gives them back their nobility and crunchiness and on top of that, it’s excellent.

But… I already told you!